Southern Californians depend upon two important sources of water:

Aquifers are porous stone, sand, and other soil particles that store water underground. Water fills the pores, or air spaces between particles. Holes dug into aquifers (wells) fill with water, which can be pumped to the surface for our use.

Locally and globally, underground water is being mined and depleted. Without adequate recharge, underground water levels drop. Recharge occurs when water is allowed to soak into the soil surface and percolate down to an aquifer. Roofs, streets, and parking lots prevent infiltration and hasten storm water through drains to local waterways, not allowing our aquifers to recharge.

Communities can increase the amount of water that reaches aquifers by finding locations where hard surfaces, such as concrete and asphalt, can be replaced with permeable materials.

Individuals and communities can also help by reducing the amount of pollutants that enter our storm drain system and waterways, including washes, creeks, arroyos and ultimately the Santa Ana River. Since people, often unknowingly, generate the largest amount of storm water pollution, we can be the largest part of the solution. Find out more about how RCRCD can help educate you and others about these concepts, to help ensure that future generations will understand the importance of water as a vital resource and form lifelong habits that ensure its responsible use and care.

Most groundwater is pumped by local public utilities, however, a few landowners have private wells. Riverside has holdings in the historic Gage Canal, which delivers ground water to most of the remaining citrus areas within the city. This source is of fair quality (420 ppm average total dissolved solids). The canal delivers 36,000-39,000 acre feet of water to the Arlington Heights area. Fifty-five percent of the water is delivered to citrus with the remaining 45 percent delivered to a City of Riverside Reservoir.

Degraded water quality and contamination plague some local underground water sources. The Arlington basin has been abandoned due to high nitrate, MTB, and perchlorate levels. Riverside installed infrastructure to remove perchlorate from water extracted from contaminated wells. A reverse osmosis desalination plant is currently operating in the basin to produce a domestic quality supply and to help clean underground water.

In addition, some communities rely on Colorado River water and the State Water Project to meet needs. Amounts of imported water vary from year to year. The California State Water Project, delivered chiefly for domestic uses, began with a small increment in late 1979. Metropolitan Water District is the wholesaler of state water, which is normally provided to Western Municipal Water District (WMWD) and other communities. During the latest and worst drought on record, the City of Riverside sold water from underground sources to WMWD. Western provides water to the higher elevation areas in, and around Riverside, including Orangecrest, Mission Grove, Woodcrest, and Gavilan Hills. WMWD is the largest supplier of water in the RCRCD meeting both agricultural and domestic needs.

The Colorado River water is high in salts (around 700 ppm) and has become increasingly costly for agriculture. A significant entitlement reduction has occurred. Since the ongoing drought, less and less water has become available for use by all municipalities with rights to the water.

The City of Corona blends underground supplies with varying percentages of Colorado River water (6% in 2014), predominantly for domestic purposes. The City of Norco currently supplies its users, essentially domestic, from underground water, which is above the Health Service Standard in regard to nitrate levels. Wells in some areas have been capped due to nitrates.

The only water supplier in the District with surface flow rights, is the Elsinore Valley Municippal Water District (EVMWD). They also  pump from underground supplies to meet the bulk of the remaining agricultural irrigation needs. The water district anticipates the need for supplemental water from Western Municipal Water District due to domestic water demand increases. Other areas served from underground sources include the City of Grand Terrace, Home Gardens, and small portions of Lake Elsinore and Colton.

The City of Corona was an early adopter of reclaimed water use. Corona installed purple pipes throughout the City and irrigates its parks with reclaimed water.

The Cities of Colton, Corona, and Riverside have an agreement with Cal Trans to irrigate landscaped areas along the freeways with reclaimed water. Some of the tertiary treated water is discharged into the Santa Ana River for enhancing riparian habitat.

Much of the water we use locally comes from underground sources and is provided to users by a number of agencies. To learn more about local water supplies and services visit these agencies. 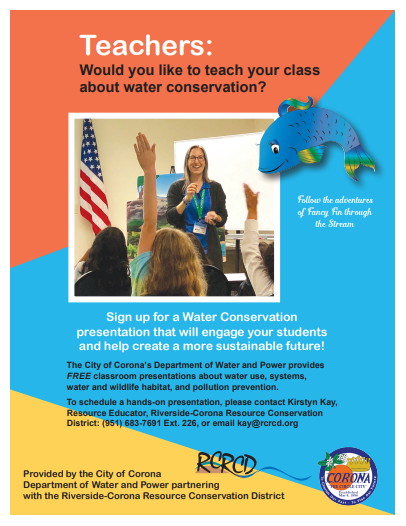 A Resource Educator from the RCRCD can visit your school to conduct a hands-on classroom program to demonstrate water concepts and help your students learn about sustainable water use.